The video was now ready to be created. We didn't know how long this video would take to create but we got together one more time and started it. The plan was to work on our own part and add them together at the end because that would be the most effective way to do it. I would also help the team with my knowledge in Adobe Premiere.

I created the intro using the text tool in Premiere and would play around with the opacity setting to get it fading in and out. I think the intro turned out great and it would lead to Alek's part where he would talk about the history of fake news. We would use some basic transitions to get to the next part which was mine. I added the main goals at the start of my part and then would go onto talking about what went into creating everything. 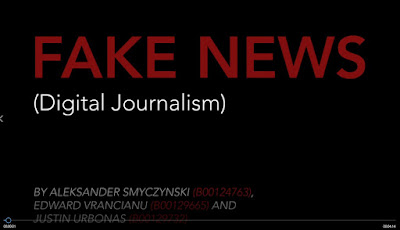 From here, I would let Justin talk about how they created the articles and go in depth on that. I would cut in one more time to let everyone know that everything was ready but we just had to wait for replies. Justin would talk about all the fake replies we got and how many views there were on the articles. It would then slowly move into the credits where we had everything referenced. 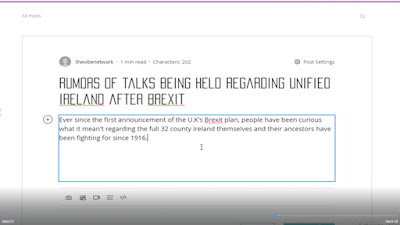 So we had the video mostly ready but we needed to add our voices to this. Luckily, Alek brought in his microphone which we would use to record our voices. We all recorded our parts but it took awhile because there would be some sort of noise or we would stutter which ruined it.

When we finally got all the audio, we would sit down and listen to it but we realized that half of my part and Alek's part the quality was bad because we moved location a few times to record it. We recorded my parts again but not Alek's because we were running out of time.

We then sat down and added all the audio to the video and lined it up as well. I think it went well and all we needed left was a background track which Alek found and we stuck it into it. I played with the audio and made it louder during the transitions as no one was talking and then lowered it when there was.

The video was now complete and all we needed now was to export it. We had an issue with this because it wouldn't export in a high quality setting which was annoying. I tried exporting multiple times while changing the settings for the next hour and a half but nothing was working so we left it and uploaded the video to Moodle.

Overall, I was pretty impressed how the video turned out. It was very relaxing to watch because of the song we used and i'm proud of what we did. It took a long time to create this project and I think it was worth it because I learnt a few more skills in Adobe Premiere. One thing I wished we talked more about was the results. I wish we added more of them and talked about Facebook as well but I guess there's nothing I could about it. Otherwise, I think the video turned out very well and I'm glad I got to work with Alex and Justin.
Posted by Edward Vrancianu